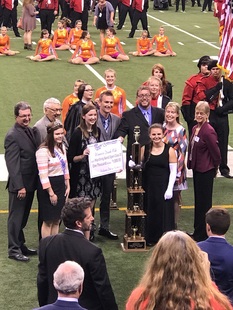 Luke is a percussion arranger/composer, show designer, adjudicator, and consultant across the nation.
His bands have placed in the top five at the Indiana State Music Association State Marching Band Finals
since 2006 including three ISSMA Class D State Championships (2010, 2016, and 2017) and five State
Championship Runner-Up finishes (2007, 2012, 2013, 2014, 2015). In 2009, The Springs Valley
Blackhawk Brigade was a Bands of America Grand Nationals Semi-Finalist and placed 3rd in Class A. The Springs Valley Winter Winds ensemble also won the 2021 Indiana Percussion Association State Championship in Winds Scholastic A class.

In 2012, 2014, 2015, 2017, and 2018 the Springs Valley Band Department was designated as one of the best communities for music education in the United States by the NAMM Foundation. The ensemble also received the NAMM SupportMusic Merit Award in 2014, 2015, 2017, and 2018. In addition, Springs Valley was a Grammy Foundation Signature School Semi-Finalist in 2013. The band has been recognized for artistry, hard work, and musical excellence by Indiana Governor Mitch Daniels and U.S. Vice President Mike Pence (former Indiana Governor). In 2014, Luke was awarded the Peabody Energy Leaders in Education Award.

Luke has a Master’s of Science in Music Technology and a Bachelor’s of Music Education degree from Indiana University. While at IU, Luke studied with Gerald Carlyss, Wilbur England, James Strain, and Jim Ancona.

Luke has arrangements and compositions published by Tapspace, Row-Loff Productions., Hober Reber Productions, and CounterMotion Marching Designs. Luke is a member of the Vic Firth Education Team and the D'Addario (Evans Drumheads) Education Collective. Luke is also the Technical Support Administrator for the Virtual Drumline:2.5 Sound Library, a product of Tapspace Publications.

Ryan is a composer, conductor, and sound artist residing in Virginia.  Ryan’s work in recent years has explored a fusion of natural sonic environments with spectral and monochromatic textures influenced by his interests in the environment, visual art, and spirituality. His work is saturated by themes of stillness, drone, atmosphere, minimalism, and nature.  Ryan’s works have been performed by members of the National Symphony Orchestra, The Catholic University of America Orchestra and Chorus, Scot Hawkins, Winchester Musica Viva, and many other world class musicians and ensembles.  He has participated in the Fringe Festival, Wilder on Wilder Music Festival, Interlochen Summer Music Festival, and has held residencies at Wildacres Artist Colony, Factory 449 Theatre Collective, Winchester Musica Viva, and the Composers & Schools in Concert (CSIC).

Ryan has studied at Bridgewater College, Interlochen, Shenandoah University, and received his D.M.A. degree from The Catholic University of America. Ryan founded and directed Frequency: New Music of the Valley, a Northern Virginia concert series featuring works by emerging composers.  Currently, Ryan is the Director of Choral Activities for the Clarke County School System where he additionally teaches aural skills, music theory, music appreciation, and composition.  Ryan is also an Adjunct Professor of Music at Lord Fairfax Community College where he teaches voice and piano.
Stan Phillips - Wind Composer

The product of a musical upbringing, Stan has been writing and arranging marching band shows and music for over ten years.  He has been fortunate enough to be able to enjoy being heavily involved with drum corps since the age of sixteen, and has performed with Carolina Crown and the Blue Devils before aging out.

During his tenure at the University of Georgia, where he received his Bachelor’s in Music Education, Stan began writing and designing shows for several groups around the area.  This allowed for continued growth and interest from groups across the country with each subsequent year.  In recent years, Stan went on to study some advanced compositional techniques at Florida State University.

A brass player by trade, he is currently in the process of diversifying as much as possible to help bring elements of all music to his writing.  It is his personal goal that he brings a product that will make any ensemble competitive as well as help allow its members to feel a sense of accomplishment and pride with each performance.

Laura has a Bachelor's and Master's degree in Speech-Language Pathology from Indiana University.

Laura was a member of the WGI color guard Obsidian for two years.